Motocross fans will be happy to know that Suzuki will be releasing a wide variety of dirtbike models in 2012, including the RMZ450 that has allowed Ryan Dungey to maintain

3rd place in the current AMA supercross standings.  While only the RMZ250 and RMZ450 were released in 2011, both of these models along with the popular RM85 and RM85L two strokes for kids will be produced for model year 2012.

The fuel injected four stroke RMZ race bikes have been wildly popular the last couple of years and are going to be even beter in 2012.  Suzuki’s production of these motocross monsters was dramatically cut back in 2011 and we expect the same for 2012. Contra Costa Powersports was only allocated two each for the RMZ250 and RMZ450.  With production still low, we expected to receive only the same number of 250’s and 450’s this year. If you are thinking of a 2012 RMZ250 or RMZ450, don’t delay.

The RM85 and RM85L were last produced in  2009 and 2008 respectively.  While other manufacturers have gotten away from the two stroke market, Suzuki still sees a demand, 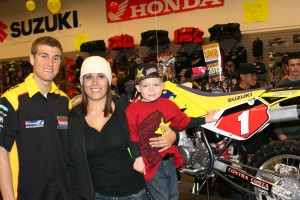 especially for the younger riders. That is why thye have brought back the 2012 RM85 along with the 2012 RM85L.

Feel free to contact a sales associate at Contra Costa Powersports to get more information about the 2012 lineup of Suzuki dirt bikes.