Suzuki team racer Ryan Dungey finished in second place at the first race of the season, Anaheim 1.  Ryan, racing on the all new 2011 Suzuki RMZ450, passed Ryan Metcalfe early in the race to move in to second place, where he remained till the checkered flag. 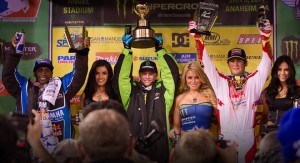 Ryan Villopoto took the hole shot and never gave up the lead.  James Stewart, who finished in third, had an amazing race after getting stuck in the middle of the pack during the hole shot.  He was able to fight his way up to second but could not catch Dungey.  See all these racers, live, January 29th in Oakland.