New for the Holiday Season! Travis Pastrana and the crew are back with their latest installment of the Nitro Circus Series….their Greatest Hits. This special edition 2-DVD set takes you through 15 years of incredible stunts and epic failures. 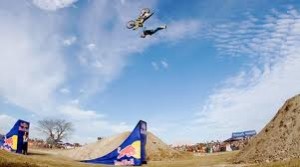 The first disc is an intimate setting of the cast and crew sitting around a fire bench racing and talking not only about the stunts that have made this the number 1 series of stunt videos in the world, but also the hair-brained schemes that made them push themselves and machines to the limits of physics.

The second Disc is a compilation of all of Travis Pastrana’s jaw dropping stunts on his Suzuki RM250 that has made him the most popular X-Games Athlete to ever walk the face of this earth.